Debbie Macomber’s ‘The Unexpected Husband’ – ‘Jury of His Peers’ – is book one of a bundle of two books published in one. A very short book. I was able to read it in three days. It’s a fast read but the story is not well-constructed. It left me feeling it was written in a rush with the author shoving into the plot all sorts of silly reasons for the things that happen and forcing situations to build a story around them.

The story starts out interestingly setting a funny tone for what to expect but soon enough it starts to flop. Very early in the story, I found I was not able to connect with the characters. Caroline Lomax, the heroine, is too unrealistic as a person. She has childish reasons for acting like a brat when she’s actually an adult trying to prove she’s capable and passionate about her cooking. She’s in constant fights with herself, her family and her love interest but in a very silly way, which makes her an unpleasant character. I really did not like her.

Ted Thomasson, the hero, is more likeable, but then again unrealistic. Though he was better developed as a character than Caroline, he’s absolutely perfect which is never satisfying, he needs to be more real. Having become the, apparently, most handsome, successful bachelor he still seems to be smitten by this obnoxious woman who’s never treated him well. Who does that?

The whole story is built around a criminal case and the jury to which the hero and heroine belong. The case is just silly and very lightly developed in the story and plainly boring. Turns out Caroline and Ted become the target of threats for being the only jurors voting differently than the rest and this forces them to run away together for safety and spend more time with each other pretending to be a married couple. Really?

Overall, light read, not deep in any way. No big development or growth for the characters. The idea has great potential but it needed more time. 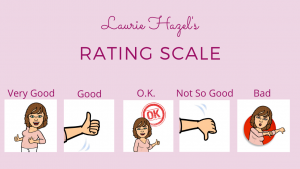 Laurie Hazel is a sweet/clean contemporary romance and romantic women's fiction writer based in southern Ontario. Her writing is characterized by wholesome, heartwarming stories of love where courage, hope and strong faith take centre stage in the face of adversity. Her work has been published by Whispering Willow Press and Colorful Pen Press.